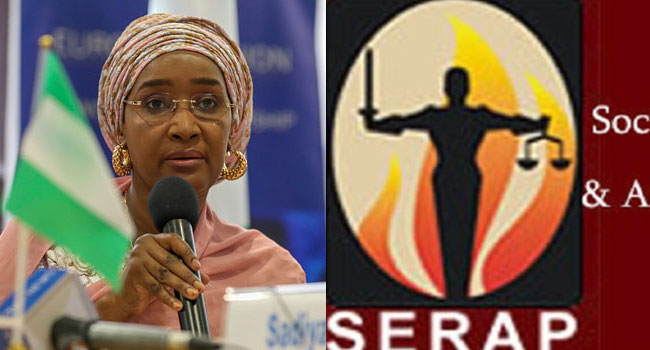 Socio-Economic Rights and Accountability Project (SERAP) has sent a request to the Federal Government asking that the Independent Corrupt Practices and Other Related Offences Commission (ICPC) and Economic and Financial Crimes Commission (EFCC) be invited to monitor the implementation of the school feeding programme.

SERAP in the Freedom of Information (FoI) request which was sent to the Minister of Humanitarian Affairs, Disasters Management and Social Development, Ms Sadia Umar-Farouk is also asking the Federal Government to make public, the details of the suppliers and contractors in charge of the programme.

The group in a statement signed on Sunday by its deputy director Kolawole Oluwadare, said it is calling on the authorities to “urgently publish details of the suppliers and contractors, the procurement rules, including bidding processes, the total budget, and all designated voucher distribution and collection sites for the implementation of the school feeding programme at home.”

SERAP is also seeking “information on the number of states to be covered during the COVID-19 crisis, the projected spending per state, details of the mechanisms and logistics that have been put in place to carry out the programme, as well as the role expected to be played by the World Food Programme.”

Umar-Farouk had on Wednesday announced that the government would start feeding school children in their homes during the COVID-19 crisis, starting from Ogun and Lagos states, and Abuja.

“Publishing the details requested is in the public interest. This would help to address public scepticism regarding the ability of the government to satisfactorily implement the programme, promote openness, and allow Nigerians to track its implementation and to hold suppliers and contractors to account.

“SERAP notes that the UN Convention against Corruption to which Nigeria is a state party requires the government to set the highest standards of transparency, accountability and probity in programmes that it oversees.

“The government has a responsibility to ensure that these requirements and other anti-corruption controls are fully implemented and monitored, and to ensure that the programme benefits the children and families who need it the most,” the FoI request which was signed by SERAP deputy director Kolawole Oluwadare, read in part.

SERAP said publishing the details of suppliers and contractors and the procurement rules being implemented for executing the school feeding programme at home would also remove the risks of conflicts of interest and politicisation of the programme, as well as promote transparency and accountability.

They also urged the Federal Government to establish an online national database for all suppliers and contractors responsible for carrying out the programme to feed school children in their homes, which is expected to cover over three million households in Lagos and Ogun states, and the Federal Capital Territory, Abuja.

“We would be grateful if the requested information is provided to us within 7 days of the receipt and/or publication of this letter. If we have not heard from you by then, the Registered Trustees of SERAP shall take all appropriate legal actions under the Freedom of Information Act to compel you to comply with our request,” the statement added.

SERAP noted that the information being requested does not come within the purview of the types of information exempted from disclosure by the provisions of the FoI Act because it bothers on an issue of national interest, public concern, the interest of human rights, social justice, good governance, transparency and accountability.